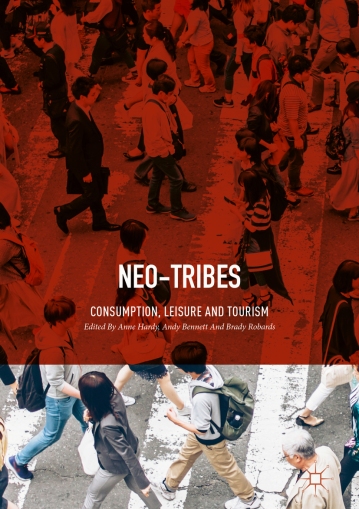 I first came across the idea of neo-tribalism during my PhD. Essentially it’s a way of thinking about belonging – a neo-tribe is ephemeral, and often place- or event-based. Think of the feeling of connectedness strangers barracking for the same team have at a sports match, or the feeling of sameness and belonging queer people experience in a gay bar. Outside of these events or places, the connection might not exist. The idea was originally developed in Michel Maffesoli’s book Time of the Tribes, but it has gone on to be applied in a range of disciplines.

My PhD supervisor, Prof. Andy Bennett, had used neo-tribalism to critique subculture as one of the dominant ways of understanding youth culture, especially in the study of popular music. Andy and I wrote an article called ‘MyTribe: Post-subcultural Manifestations of Belonging on Social Network Sites‘ for Sociology that used neo-tribalism as a way to think about belonging mediated in digital spaces.

A few years ago, Andy and I teamed up with a colleague of mine at UTAS – Dr Anne Hardy – to put this book together. Anne studies tourism, and has been using neo-tribalism to think about how RVers (Recreational Vehicle/Motor-home users) experience belonging and connectedness with other RVers – around camp-sites, through shared language and practices, and in vehicle hierarchies. We had some sense that Maffesoli’s original conceptualisation of the neo-tribe had grown legs and moved into a range of different disciplines, so this book sought to take stock of that and bring a range of different applications of Maffesoli’s idea into a single anthology, from music and tourism to marketing and digital cultures.

You can check out the Table of Contents and buy the book here:

I’m especially proud of the section on digital spaces:

The abstract for my chapter on reddit is below.

Social media site reddit describes itself as the ‘front page’ of the internet. The site’s 274 million month users share, discuss, ‘up-vote’ and ‘down-vote’ a wide array of content found on the internet: news, pictures of cats, deep philosophical discussions, scientific breakthroughs, pornography, advice columns, GIFs of people falling over; reddit has it all. The most ‘up-voted’ content rises to the top of the site, while less current and less interesting content ’sinks’. The site is divided into more than ten thousand active (and many more less active) ‘subreddits’, framed as communities organised around a particular topic. In this chapter, by looking at four case studies, I push beyond the contentious descriptor of reddit as ‘a type of online community’ to consider the systems of belonging on reddit (via everyday labour) as more akin to the temporally situated, purposive neo-tribes theorized by Maffesoli (1996) and Bennett (1999). Reddit, and many of the site’s subreddits, operate on a very specific shared set of languages and conventions, rules, expectations, and rituals. Reddit neo-tribes can crystallize over time (as per Robards & Bennett 2011), but they are largely ephemeral, readily aligning with Maffesoli’s (1996) original conceptualisation.